Tuesday (July 1)
The first of us arrived and set up.  (This account will be skeletal, and won’t include the many conversations among the artists, nor the rehearsals, impromptu music readings, etc., that filled up much of the week.  I should also note, thankfully, that once again Kristi Elkins would take charge of the kitchen, contributing the bulk of the food and labor; she would be assisted by many, but primarily by Tom Ontiveros and, later, Anjee Nero.  Michelle Lou and Israeli Reichman also each prepared a special dinner.  The photography of the gathering would this time be both Tom and Israeli’s work; Israeli would also shoot many portraits of participants over the course of the festival.)

Wednesday (July 2)
After an introductory meeting to set a rough schedule for the festival, Jeff Treviño gamely gave the first presentation, presenting his research on old recordings and changing interpretative standards.  After lunch, Erik Ulman briefly introduced the work of the Judson dance group, after which Marcia Scott presented some videos of Trisha Brown’s early choreography.  She would teach one piece, Primary Accumulation (1971), to volunteers for performance at the end of the session.  After dinner, we viewed Raul Ruiz’ On Top of the Whale (1982).

Thursday (July 3)
Adrian Coburn presented her work with just intonation, including a brief singing workshop.  Then Greg Lukianoff read from his novel in progress, X.  After lunch, Carolyn Chen presented three recent pieces.  After dinner there was a showing and discussion of Andy Warhol’s film The Life of Juanita Castro (1965).

Friday (July 4)
In the morning Erik gave an introduction to the music of Wilhelm Killmayer.  Then Juan Cristóbal Cerrillo discussed his own recent music and his thinking about the “imperceptible.”  After lunch Kwami Coleman explained George Russell’s “Lydian chromatic concept of tonal organization.”  After dinner David Coll presented his recent music; and Cole Heinowitz gave a dramatic reading of some favorite texts (Weil, Sade, Shelley…), alternating with vigorous ragtime piano performances by Jeff.

Saturday (July 5)
Video artist Ian Winters and composer Evelyn Ficarra began the day with a screening and discussion of their collaborative work in progress 12 Short Films about Water.  After lunch curator Paola Santoscoy presented the work of several contemporary performance and installation artists.  Then Sabina Piersol read her recent poems.  In an annual tradition, the Scotts and family friends joined the Poto participants for a barbecue dinner.  After the festivities, Erik presented Pedro Costa’s film about Jean-Marie Straub and Danièle Huillet, Où gît votre sourire enfoui? (2002).

Sunday (July 6)
Masseuse Sarah Miles began the day by giving a workshop on massage technique, performed on the body of Grace Leslie.  Then Jeff presented recordings of his recent music.  After lunch Cole read her poetic sequences The Rubicon, first presented at Poto two years before, and the new Songs of Joy.  She was followed by Heather Gordon, who read a new sequence, come down winter, and splenic chord.  During dinner Greg read a short story featuring a woman with a strong animosity towards cats.  After dinner Grace played a recent electronic piece and discussed her current work with sound spatialization; and Ian showed a video projection made for and at the pond with audience participation from Juan Cristóbal and Heather G. Finally there was a showing of another Ruiz film, La Vocation suspendue (1978).

Monday (July 7)
Erik began the morning with a presentation of his recent music, focusing on the Fragment for Jules Olitski and Ocean.  Then Jason Federmeyer presented his newest piece, to end…to begin.  Following lunch we gathered at the creek for a reading:  Adrian first read from Alain Badiou on politics and community; Cole and Erik then read Cesare Pavese’s dialogue “The Lady of Beasts,” from the Dialogues with Leucò; Erik followed with Hölderlin’s hymns “Mnemosyne” and “Patmos,” in the Richard Sieburth translation.  The Pavese was a preparation for a viewing of Jean-Marie Straub’s film Le Genou d’Artemide (2007); which was followed by an outdoor projection of the Fischli and Weiss film The Right Way (1983).  Sometime during the day Paola and Juan Cristóbal created an almost imperceptible creek sculpture.

Tuesday (July 8)
Erik read Heidegger’s essay “Overcoming Metaphysics,” prompting Jeff to read some John Dewey.  In the afternoon Carolyn gave a presentation on “courage and awesomeness” in contemporary music.  Before dinner Marcia, Paola, Carolyn, and Adrian performed Primary Accumulation in the meadow.  After dinner there was a musical performance—Erik and Jeff played the two Louanges from Messiaen’s Quatuor pour le fin du temps as well as the premiere of an untitled duo by David; Jeff and Juan Cristóbal performed Steve Reich’s Clapping Music.  Then there was a group reading of Cole’s libretto for a Western opera.  Then all went down to the barn, where Tom, with Anjee’s assistance, had prepared a video projection.  At night, after some participants had left, there was one further film viewing, of Jacques Tourneur’s I Walked with a Zombie (1943).

Wednesday (July 9)
Those remaining cleaned up and, hastened by a fire that had broken out at the edge of the property, cleared out. 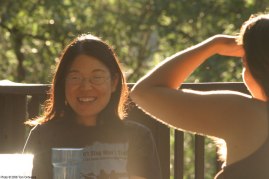 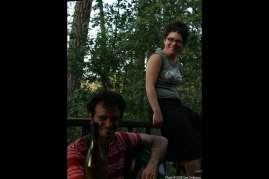 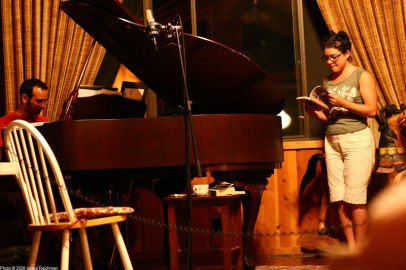 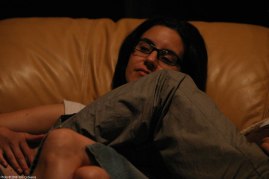 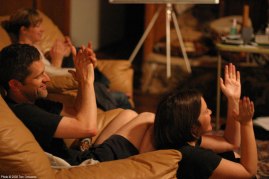 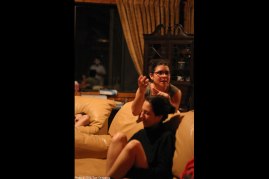 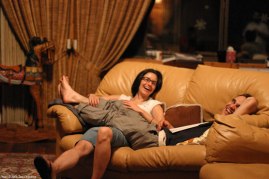 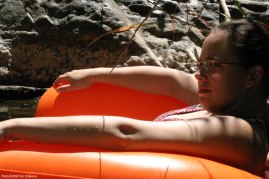 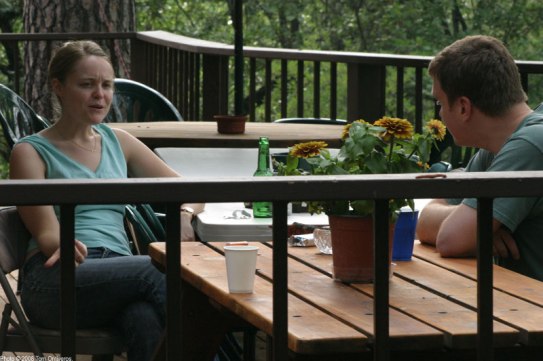 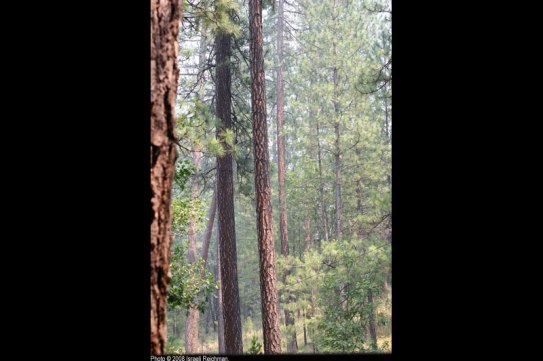 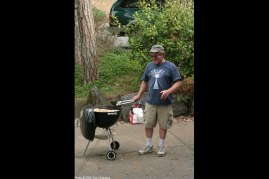 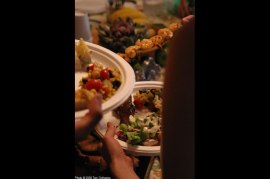 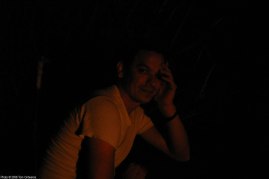 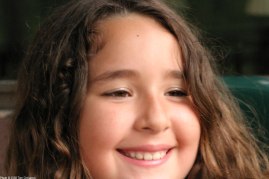 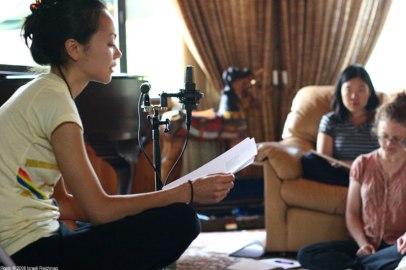 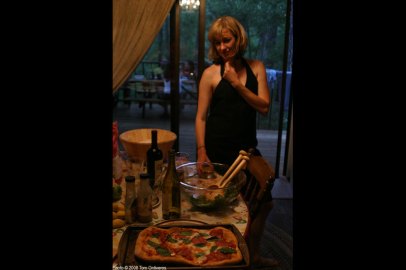 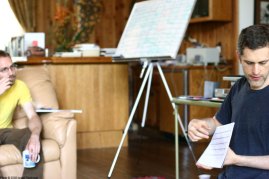 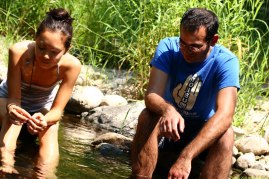 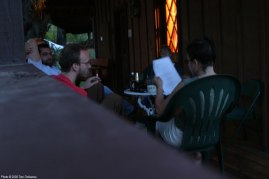 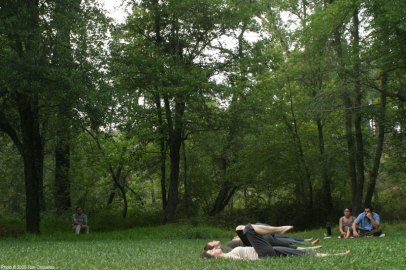 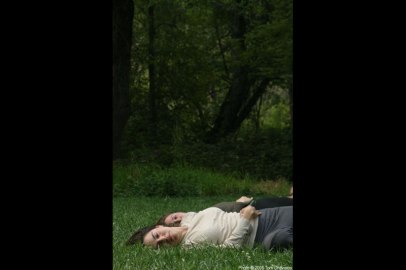 Intersection for the Arts

We are a Member of the Intersection Incubator, a program of Intersection for the Arts providing fiscal sponsorship, incubation and consulting services to artists. Intersection is San Francisco's oldest alternative arts space, presenting groundbreaking works in the literary, performing, visual and interdisciplinary arts.